On Sunday, January 26, I joined forces with the 1882 Foundation, the Humanities Truck, and the Anacostia Community Museum to host the first prototype of the Dear Chinatown project at this year’s Lunar New Year Parade. The Dear Chinatown project is part of my design research thesis on the future of D.C.’s Chinatown. It is a making and sharing station where past and present residents can declare what they love about the neighborhood, and why, through the production of poster-sized love letters. Through words, sketches, calligraphy, poetry, or sharing a story, the project aims to capture the hearts and minds of the community and what they treasure most about D.C.’s Chinatown. The medium of poster-making is not only an object for display but can serve as a catalyst to inspire new ideas for future proposals for change connected to the physical place.

Planning a first-time collaboration for a massive event like Chinatown’s Lunar New Year Parade in the middle of winter is no small feat, but we were gifted with cooperative weather, great collaborators, amazing volunteers, and an energetic parade crowd. 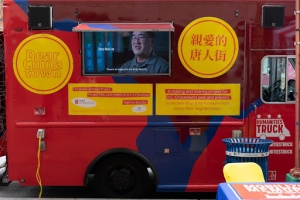 We parked the truck and flanked both sides with each of the red and white striped tents. At one end, the Humanities Truck team set-up the Mobilizing Memories interview station and at the other end, we installed the Love Letters to D.C.’s Chinatown poster-making station. Inside the truck, the Smithsonian Anacostia Community Museum curated a mini-version of A Right to the City’s Chinatown exhibit, and on the outside of the Truck, oral history interviews from the exhibition played for the duration of the event  People stopped by to point out friends and family members they knew in the film. We ran the event from approximately 10:00 am to 4:00 pm that day.

Over the course of the day, we were overwhelmed (in the best way possible) by the interest and engagement with our multi-modal offerings. Kids and their parents crowded the love letter-making station, parade participants and community leaders stopped by to say hello, and many Wah Luck House residents came over to peer over the poster-makers and stuck around to talk to us about their lives in the neighborhood and how it’s changed so much over time. One resident said that despite all of the change happening all around them, this one block remains their home. The Mobilizing Memories station collected four interviews that day. Three from past or nearby Chinatown residents and one from a new D.C. resident. Each narrator reflected on why Chinatown is important to their own cultural identity. 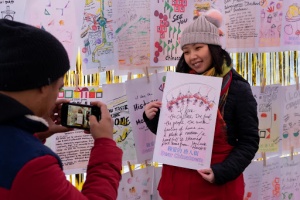 Over 80 “love letters” were made to D.C.’s Chinatown that day. We pinned them up as the day went on and collected a fantastic gallery of affections to D.C.’s Chinatown. In a cursory review of the poster content, topics of heritage, history, belonging, comfort, family, and of course, food, emerged as reoccurring themes. These insights reinforced what I heard through my conversations and interviews with past residents and longtime community leaders over the past few months. A place that used to be more of a home than it was a “downtown”. Moving forward, these insights will be used to design the next iteration of the Dear Chinatown project that can capture more stories and richer insights from its longtime residents and their lives in Chinatown. As the project evolves, it hopes to expand the design dialogue on the potential of the neighborhood to be shaped by those who consider this place home, both literally and symbolically.

Interdisciplinary collaborations such as these are incredibly valuable and we couldn’t have done it without the support and coordinated efforts of the 1882 Foundation, the Chinese Consolidated Benevolent Association, and the Lunar New Year Parade Committee. We were able to combine and leverage our different capacities to facilitate a new opportunity to share and collect community histories and bring a few hours of public visibility to why neighborhoods like Chinatown matter to people and their everyday lives.

Jenn Low is a landscape architect and MDes in Integrative Design graduate student at the Stamps School of Art and Design at the University of Michigan. She is also a Washington, D.C. resident and on hiatus from her professional life to pursue her graduate studies in this design for social change program. In partnership with the 1882 Foundation, her research explores how we can facilitate ideas and initiatives for place-keeping in D.C.’s Chinatown.